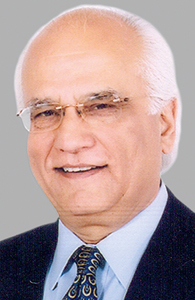 Tariq Kirmani has more than 50 years of multifaceted experience in the corporate sector, both domestic and international.

After completing his Master’s degree in Business Administration, he started his career with a multinational oil company (Caltex – later Chevron Pakistan) in 1969 and worked for 7 years in the United States (US), United Arab Emirates (UAE) and Australia in different senior management positions in Marketing, Operations and Finance. In 1991, he became the first Pakistani to be elected as a Director of the company.

In 1999, he joined Pakistan State Oil (PSO) as Dy. Managing Director and in 2001 was appointed as the Managing Director & CEO. He turned around this public sector organization and converted it into a customer focused entity by giving it a new brand image and making it profitable while aggressively competing with multinational companies like Shell, Chevron and TOTAL.

In 2005, the Government of Pakistan (GoP) appointed Tariq Kirmani as the Chairman & CEO, Pakistan International Airlines (PIA). He served the airline for 2 years during which he introduced customer focus, identified and initiated implementation of major programs in three key areas for improvement (a) Aircraft Fleet Renewal (b) Employee Rationalization (c) Systems and Processes through implementation of IT and Enterprise Resource Planning (ERP).

Due to his personal efforts, PSO and PIA became members of the World Economic Forum, Davos, Switzerland and the World Business Council for Sustainable Development, Geneva, Switzerland.

Currently, he is serving as the Chairman of Gas & Oil Pakistan Ltd. (GO) and Pakistan Refinery Limited (PRL). He is also serving as a Director on the Boards of Professional Education Foundation (PEF), IBA Selection Board and National Academy of Performing Arts (NAPA).

This Sliding Bar can be switched on or off in theme options, and can take any widget you throw at it or even fill it with your custom HTML Code. Its perfect for grabbing the attention of your viewers. Choose between 1, 2, 3 or 4 columns, set the background color, widget divider color, activate transparency, a top border or fully disable it on desktop and mobile.